There are currently more “international days” than days in the year (approximately 400).
Each of these days is trying to raise awareness on important problems (diseases, human
rights, environment, etc.), or on even more important issues (“Go barefoot day”,
“Raspberry cake day”, etc.). Only at the highest level, can a topic be considered
sufficiently important to deserve a full year of celebration. This is why United Nations
supports between one and five “international years” every year. Different than the
selection of international days, the UN selection process is so rigorous that we can
trust every chosen topic to be essentially pertinent for Mankind. Through this selection
process, this year has been proclaimed “International Year of Light and Light-based
Technologies” (IYL 2015), but it is noteworthy that it is also the “International Year of
Soils” (IYS).

I am fortunate to be an active participant of IYL 2015, and in particular, to represent the
African Physical Society (AfPS) in many IYL 2015-related events.  One of the questions I am
asked very often is “Why would such a year be important for Africa? Why do you think we
should pay attention to IYL 2015 while we are still struggling with very fundamental problems
like education, healthcare, and basic infrastructures, etc? ”

My answer is always simple: the economy.

It should first be reminded that Africa is, to a large extent, an unknown continent. This
is why whenever I present the African perspective of IYL 2015 to an international audience, I
invariably start with a slide entitled “Africa in numbers”, which aims to provide some
key socio-economic indicators about the continent. The mainstream cliché of Africa
(sometimes popularized by Africans themselves) portrays a continent plagued with wars,
chronic instability and structural under-development. This cliché –as most clichés- bears
some part truths. However, there is another reality which is much less trivial to grasp,
but is no-less factual: The African continent currently enjoys unprecedented economic
growth, so vigorous that its wealth doubles every decade. Many books and articles have
already identified and analyzed this trend. I encourage the reader to consult the online
article cited below this post, entitled “The world’s fastest growing middle-class”, which
proposes a compelling synthesis of the current boom in African economy (1).

Therefore, even though it might appear surprising for many, light-based technologies are
intimately linked to the ongoing economic growth in Africa. For example,
telecommunications (optical fiber and mobile) are directly linked to 5 to 10% of the GDP
of most African countries, and can indirectly impact up to 20% of the economic activity.
Currently, one of the most important projects in my home country (Cameroon) is the
deployment of an optical fiber backbone which is expected to provide broadband access to
the majority of the population. Another important challenge in Africa is access to
electricity, which is undoubtedly a key prerequisite for economic growth. The sector of
solar energy is becoming the focus of major investments in the African continent, and the
number of solar panels grows at (genuinely) exponential pace, with a 60% growth every
year. 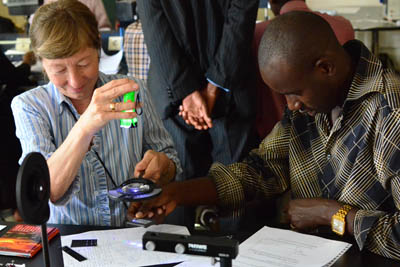 UNESCO’s Active Learning in Optics and Photonics Workshop in Rwanda in 2011. Credit: UNESCO

Therefore, a priority for African policy makers should be to ensure that enough
technicians, engineers and researchers are trained in photonics technology, in order to
operate in these economically relevant sectors. It is here that I take the opportunity to
highlight the valuable efforts of the major optical photonics societies (IEEE, OSA and
SPIE), which are actively supporting the creation and funding of Student Chapters in
Africa. Such structures are ideal platforms to enhance the networking skills of the
students, to help them keeping informed about current research, and to give them the
opportunity to lead many outreach activities in relation with optics and photonics.

Indeed, beyond the economic standpoint, IYL 2015 can be an excellent tool to raise awareness
about many other issues. For example, I highlight the challenge of affordable eyeglasses,
which is an important problem for tens of millions of Africans.  Or the development of
sustainable photonics technologies for the amelioration of African healthcare. And why
not, the creation of African-based production of photonics components and systems: after
all, Africa is a “geologic scandal” which can provide almost all the natural resources
needed to manufacture almost whatever you want.

Many think that the XXI century will be a new “Siècle des Lumières” and this time, all
the indicators are green for Africa to both contribute and benefit significantly.

– From September 14th to 16th, Ghana will organize a regional conference on the topic
“Harnessing Light and Light-Based Technologies for Africa’s Development”. It should be
emphasized that Ghana played a key role for the proclamation of IYL 2015 by the UN, and has
been at the forefront of the diplomatic process leading to this great celebration.
– From September 14th to 17th, the Africon conference will be hosted in Addis-Ababa,
Ethiopia. Africon is the largest technology conference in African, and it takes place
every 2 years in a different country.  This year I co-chair with Andrew Forbes from CSIR
(South-Africa), a special workshop dedicated to IYL 2015 in this Africon event.
– From September 28th to October 1st, Andrew Forbes is Chairing an IYL 2015 conference
entitled “Fiber Optics: light in action from science to technology” at Fort Hare
University in South-Africa.
– And finally, from November 24th to 28th, I will co-organize with Paul Woafo a
conference in Yaoundé, Cameroon, entitled “IYL 2015 in Africa – Technological Solutions for
Development”.

If you have never been to Africa, you see that there are many opportunities to choose
from. Therefore, you have no more excuses: join us, you will be very welcome to celebrate
the IYL 2015 in our continent. 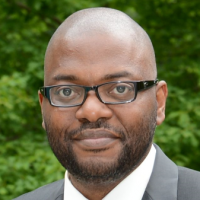 Yanne K. Chembo obtained a Ph.D. degree in physics from the University of Yaounde I (Cameroon) and a Ph.D. degree in laser physics from the Institute for Cross-Disciplinary Physics and Complex Systems (Spain). He is currently a CNRS researcher at the FEMTO-ST Institute, France, where he leads the microwave photonics group. He is an awardee of the European Research Council and of the NASA Inventions and Contributions Board, as well as a Senior Member of IEEE. He represented the African Physical Society as a member of the delegation that presented the International Year of Light proposal at an information meeting at UN Headquarters in New York in 2013.

One thought on “IYL 2015: an opportunity for Africa”