If you play a guitar string, you will hear a note, whose tone will depend on the string diameter and on the string tension. This sound is not just made of a pure (“single”) vibration, which would sound rather ugly and boring, but rather to the overlap of several acoustic frequencies playing simultaneously, which makes the note “round” and pleasant. More than that: it makes the note unique. You will be able, in fact, to tell it’s a guitar and not a piano, or even which kind of guitar. The very same concept applies to the voice of people: you can easily distinguish two persons pronouncing the same sentence at the phone because they have a different tone. The ensemble of the vibrating frequencies that form the sound and the voice is called the timbre. In physics, we call it spectrum, and it not only applies to sound but also to light, indicating its various frequency components, i.e. its colors! 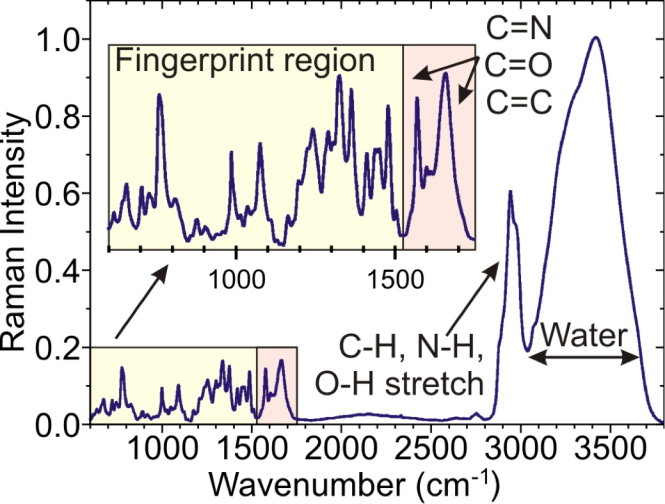 This is a typical vibrational spectrum of a cell. The various peaks correspond to the notes of the various molecules present and can be used for the precise characterization of the cell content and cell state. Credit: adapted from J. R. Thomas, Annu. Rev. Biophys. Biomol. Struct. 28, 1 (1999), http://dx.doi.org/10.1146/annurev.biophys.28.1.1.

END_OF_DOCUMENT_TOKEN_TO_BE_REPLACED

Two challenging issues in biological testing are devices’ portability and to using as little sample as possible. With this framework in mind, lab-on-a-chip devices play a major role, as they aim to integrate most of the facilities of a biology or chemistry laboratory in just a few millimeters device. They are basically made of micrometer size channels, where samples are separated, selected and mixed, and they also integrate some kind of testing system to analyze them. Optofluidic devices are a particular type of lab-on-a-chip device where light is used to test and handle samples. The use of light to analyze biological samples is widely spread as it is fast, highly accurate and, in some particular cases, allows for the analysis of samples after undergoing some pre-treatment  which might change its properties.

Among the several technologies used to build optofluidic devices micromachining with femtosecond lasers is quite promising, as it allows to produce both the micrometer channels for fluid sample travelling and the optical networks needed for analysis. Thanks to its unique 3D capabilities, the channels can be integrated with the optical networks using the same laser. Although this technology is not suitable for mass-producing labs-on-a-chip, it is quite interesting in the fast prototyping of new devices  as you have an idea and you can make and test your device in a few hours. If you are satisfied with the outcome, you can then think about mass producing the device using a different technique, such as photolithography.

3D rendering of the monolithic optical stretcher fabricated by femtosecond laser micromachining. The cells flowing in the microchannel are trapped and stretched in correspondence of the dual beam trap created by the optical waveguides. Connections to capillaries and optical fibers are also shown. Credit: OSA